Hydrogen Fuel Cell Boiler in your home! The Vitovalor 300-P

Japan now has 300,000 fuel cell appliances in homes producing hot water and electricity and the demand is increasing by the day. So why? What is it? How can you benefit? And what is the Vitovalor 300-P? Is this the same as a hydrogen boiler? Well, we are certainly the people to answer your questions, we even have one in our home! 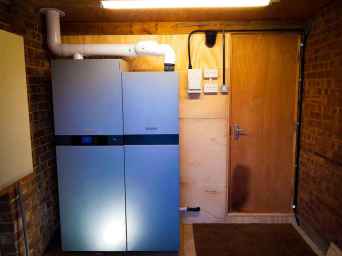 What is a hydrogen fuel cell?

In the west Hydrogen Fuel Cells are more known for there potential to power a car and are somewhat seen as a bit impractical. In reality, hydrogen fuel cell technology is a way in which hydrogen is converted into electricity and heat, and is even more suited to the home than a vehicle.

Essentially hydrogen fuel cells use hydrogens natural gravitation toward oxygen to generate an electrical differential. When the hydrogen comes in to contact with oxygen it also generates heat and water as a byproduct.

A hydrogen Fuel cell Boiler is a home unit that utilizes this waste heat for hot water and heating, while also generating electricity for the home.

Boilers that generate heat and electricity are also known as Combined Heat and Power units, or CHP. CHP, however, more commonly uses combustion engines rather than Fuel Cell technology, and is only currently available in the commercial market. Fuel cell technology uses a chemical process rather than a burning of fuels. This generally gives very little pollution in comparison to its combustion counterpart.

Is this the same as a hydrogen boiler?

Yes and No. Typically the current buzz around 'hydrogen boilers' refers more to the typical boilers we heat our homes with, but instead using hydrogen instead of gas. This will actively burn the fuel in the way we are used to.  A fuel cell, as described uses 'cold fusion' which is actually a chemical process, and has the added byproduct of electricity as well as just heat.

Read more about hydrogen boilers lower down this page.

How can I have a hydrogen fuel cell in my home?

Currently, there are only 2 manufacturers to offer a domestic solution in the UK. One is the Bluegen, however, this doesn't currently qualify for the feed-in tariff, is more expensive and doesn't offer a full solution, that is to say, it only works as a part of a heating system.

The other is Viessmann in partnership with Panasonic. Together they have developed the Vitovalor 300-P which has been crafted to suit the majority of the UK market. This product takes the natural gas available in most homes and turns it into Hydrogen which powers the fuel cell, and the waste heat is stored in a buffer for heating and hot water usage. It's an all in one unit meaning there is no longer any need for a hot water cylinder, cold water storage tanks in the loft or any other heating appliances such as boilers as it's all contained in 1 box.

Can I financially benefit from having a hydrogen fuel cell boiler such as the Viessmann Vitovalor?

There are many financial benefits in place to try and help push the technology as well as its innate ability to drive down your fuel bills.

First off, it doesn't take a rocket scientists to understand that using gas, which is typically around 3 pence per kWh, to produce electricity that usually costs around 14 pence per kWh is a financial advantage.

To make the technology even more attractive however the government is currently incentivising the electrical production by paying homeowners 14.52 pence per kWh produced even if you use the electricity within your home. What's more, they assume you export of 50% of production back into the grid and give owners an additional 5.2p per kWh for this. This looks set to expire in April 2019, however once obtained is guaranteed for 10 years.

UPDATE- The feed-in tariff has now indeed expired, however, has been replaced by the Smart export Guarantee (SEG). This sees a half-hourly rate paid to the owner for any exported electricity. The bonus here for hydrogen fuel cell owners is that it produced in the highest demand times i.e. when there's no solar or wind power being fed into the grid and so can access the best rates! -Contact us for more info on this.

The units also benefit from PACE funding, this European incentive essentially gives £6500 toward the cost of the unit, in return for allowing them to monitor your usage. A worthwhile price. Additionally, to this, the unit and its installation is only subject to 5% VAT.

As mentioned the Viessmann Vitovalor 300 P is the only hydrogen fuel cell / domestic CHP product currently available on the market. Financial benefits are secured more by the fact this unit has a 10-year warranty parts and labour.

What is the Viessmann Vitovalor 300P price? How much will it return?

The Vitovalor 300P price varies depending on the installation, however, after taking off the £6500 PACE funding and including the 5% VAT, the price typically starts from £12000 right up to £17000. However, the return on investment can be as little as 4 years if you need a new heating system anyway. This can be relatively accurately forecast due to the fact the incentives are guaranteed for 10 years,  and there are no unexpected maintenance costs due to the 10-year parts and labour warranty.

What other hydrogen boilers are available in the UK right now?

There have been a couple of hydrogen boilers supposedly released recently by the likes of Worcester and Baxi.  This is simply a bit of marketing in our opinion. Most boilers are pretty simple to make burn a different fuel such as hydrogen.  There is no real large technical revolution here.  And the issue remains, where do we get the hydrogen from? and how can we safely transport it in our old grid network?

It will be at least 20 years before we switch to a pure hydrogen gas network, if ever. By this time the boilers currently being created will be looked back upon as laughable technology I'm sure, particularly when you look at the current growth in technological innovation.

Are gas boilers being phased out?

A task that would literally take thousands of years.

Recommend﻿ us on Google here or facebook here and receive 5% discount on labour.

Or do both and receive 10% discount! Subject to terms and conditions.